Donna Guariglia was a driving force in bringing Girls/Women’s hockey to the New Jersey Colonials.  She grew up in a hockey family,  spent a lifetime actively involved as a player, parent and advocate.  Donna currently sits on the Board of Directors for USA Hockey.  She served as the President of MAWHA and USA Hockey Section Director for Girls’/ Women’s Hockey.

“Victoria joined the U19 Colonials this year and immediately made an impact with her steadfast work ethic, positive attitude and willingness to learn and adapt. Victoria can be counted on to always give her absolute best effort and the impact of her work ethic can be felt all the way back to the bench every time she hits the ice. We know that Victoria will continue to be successful throughout life and will continue to impact those around her in a positive way” – Coach Shannon Paskaris

“Molly has been a long time Colonial and it is my pleasure as a coach to have had her for the past 3 years on my teams.  Molly wears her heart on her sleeve, and is a true leader.  19 Elite has relied on her in the locker room and on the ice. She has come such a long way in her skill, as well as the mental part of the game. Over the past three years, I have seen her develop not only as a hockey player but as a young leader as well. She has continuously pushed through adversity, is highly accountable for her actions and uses every opportunity as a learning experience. Molly embraces what every coach loves to see out of their players. So often our jobs are not so much about hockey put shaping young athletes into adults, and it is an honor to see what Molly will achieve moving forward.” – Coach Dennis Crothers

Kaitlyn has a true passion for the game that you can see from the first moment you meet her. Her drive and work ethic is outstanding but what is most impressive is the way she gives the game everything she has but also how she is selfless.  She gives everything game in and game out for her teammates. For Kaitlyn, it is all about the name on the front of her jersey not on the back of it.

It is truly is a pleasure as well as a honor to coach Kaitlyn Brooks.” – Coach James Fitzhenry

“Natalia had a nearly perfect attendance record and even attended Strength and Conditioning Sessions at PSP.  She is dedicated to our team and is relentless in her desire to improve.  She attends each practice with a great attitude and has been a supportive teammate all year long.” – Coach Shelly Picard

“Charlotte is a forward and the epitome of a team player.  Charlotte gives her heart and soul every time she steps foot on the ice and never has a complaint.  She is the type of player who would do whatever it takes to support her teammates and do what is best for the overall success of the team.  While we love Charlotte as a player, we have to say that we love her more as a person.  The world would be a better place with more people like her! ” – Coaches Gina Arnone and Amanda Linklater

“Lillie plays defense and is the epitome of hard work.  She comes to the rink ready to practice and play, she is always focused and consistently gives 100 percent.  Lillie has become the informal leader on our team and leads by example with her work ethic, character and integrity off the ice.  She has been in the Colonials organize for 4 years and also plays hockey for her high school team.    She is beyond deserving of this award.” – Coach Amanda Linklater

“Lauren’s attitude, commitment to the team, and hard work consistently shined throughout every game and practice throughout the season. Her dedication to the team and the sport never waived and I’m extremely proud of her efforts this year. She was a pleasure to have coached.” – Coach Kendall Cornine

“Simone has been a tremendous teammate on and off the ice all season. She comes to every practice and game with a smile and provides an energetic spirit to the team. Simone remains positive on the bench and is a true leader. She has worked very hard all season to get better as a hockey player and has become one of our most consistent players. She is a true pleasure to coach.” – Coach Corey Brown

“As one of the oldest players in our mite group, Abby has been incredible in helping the younger players! She attends each practice and game with a huge smile and brings great energy to our team!  She is always looking to pass the puck, and is overall a great teammate!  ” – Coach Shelly Picard

“Quinn Gifis’ positive energy is contagious!  She is always positive and smiling, and she has made huge improvements this year because of her hard work and willingness to listen to what the coaches are teaching! During games she always looks to pass the puck and supports her teammates!” – Coach Shelly Picard 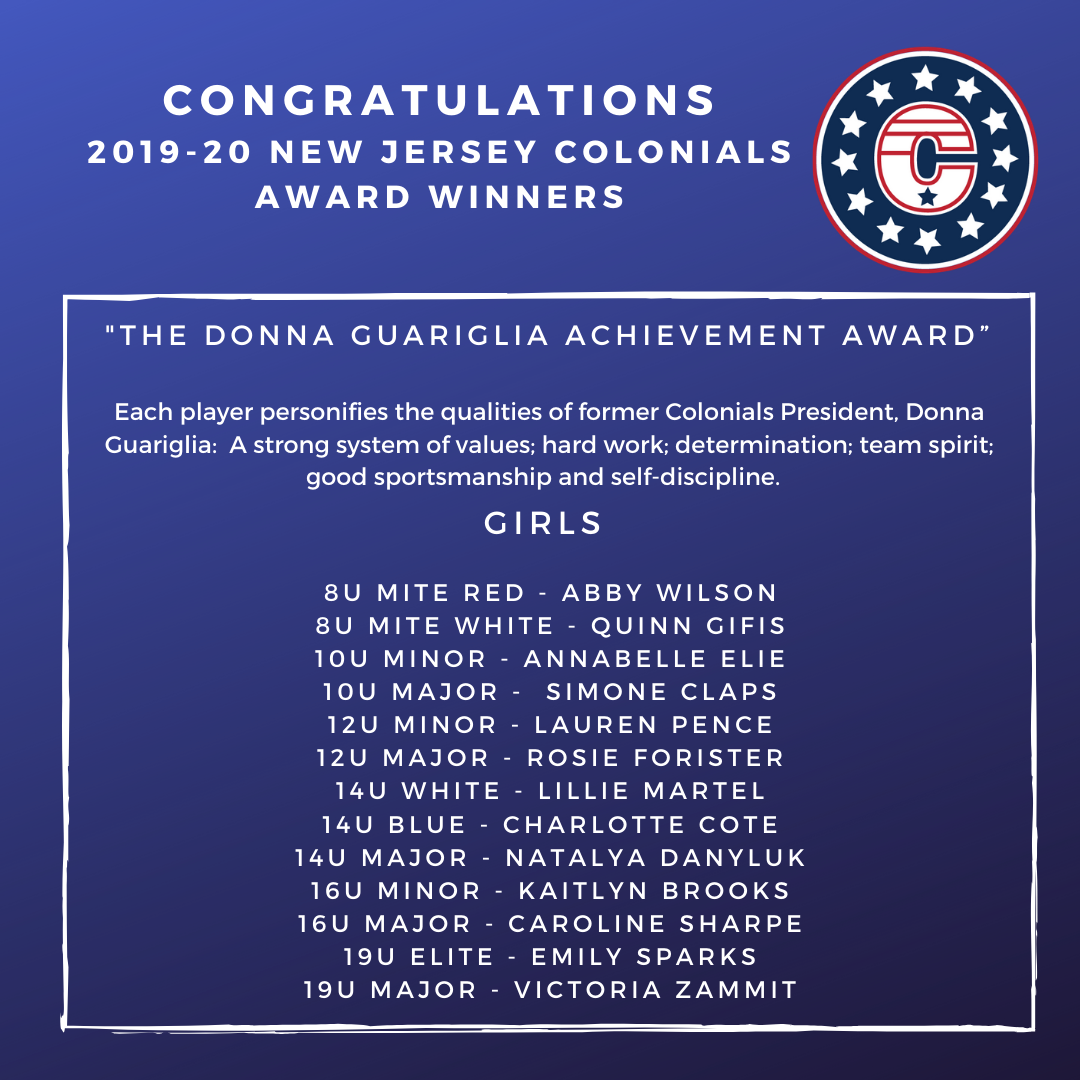