The New Jersey Colonials and Kelly family teamed up to honor 8U White player, Riley Kelly on December 18, 2021 and raise over $14,000 for Hockey Fights Cancer.  It was a special day at Mennen Sports Arena in Morris Township, NJ because of the camaraderie shown throughout the month-long effort but mostly because it marked a special two-year anniversary.  Riley Kelly and her family were celebrating the day she was declared cancer-free in December 2019.  Glorious words after two years of treatment for leukemia, the most common cancer in children.

The Kelly’s became a part of the Colonials family in Spring of 2021.  A simple e-mail sent by Riley’s uncle asking, “Do you have any openings at the 8U level for my niece?”  A few skates later and Riley was officially a Colonial.  Little did we know, this brave warrior would inspire her teammates, fellow NJC players, professional hockey players and her hometown to join together and raise awareness for Childhood Cancer.

Riley was invited to drop the puck during the Metropolitan Riveters opening weekend in November 2021.  Riveters alternate captain and Colonials Girls Director, Emily Janiga, was moved to say, “I want to do more.”  Head Coach Michael Scali and his family stepped up and the Hockey Fights Cancer campaign was born.  Over the next six weeks, friends of the family and organization donated or helped plan for the special day.   Chatham Township Mayor, Stacey Ewald, declared December 18, 2021 as RILEY KELLY DAY.  The 8U Silver team made Riley an honorary member of the team, bestowed the team’s hardest worker helmet to her and gave her yellow roses in friendship.  Additionally, they wore gold jerseys for their game.  The 8U White team also wore special game jerseys with gold lettering.  Gold is the color for Childhood Cancer Awareness.

The Colonials thank all who supported this effort, especially the Kelly family for allowing us to embrace and celebrate Riley’s journey.  Happy Holidays! 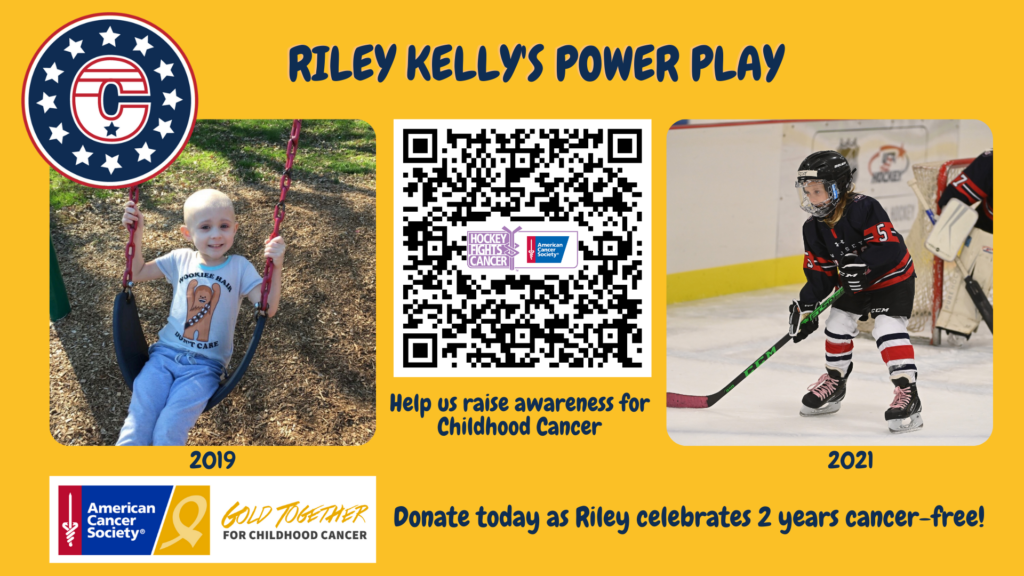