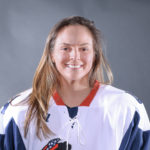 Emily Janiga has an extensive hockey background as both a player and coach. A current member of the NWHL Riveters, Emily previously competed in the PWHPA, CWHL.  She served as captain during her career at NCAA DI Mercyhurst where she earned All-CHA First team and College Hockey America Conference (CHA) Player of the Year.  During her time in the CWHL with the Vanke Rays, she also worked as a Beijing 2022 Women’s Sport Ambassador in preparation for the upcoming Winter Olympics.  Emily has 5 years of experience in youth hockey since graduating in 2016. Her coaching experience includes the 19U, 16U and 14U levels, the Buffalo Sabres Learn to Play (LTP), the Skating Instructor Academy of Hockey in Buffalo, and most recently, Skate with the HEAT and the New Jersey Colonials.