ALL EIGHT YOUTH TIER 1 TEAMS QUALIFIED FOR PLAYOFFS, FIVE ADVANCED TO THE FINALS AND 14U MAJOR WON A CHAMPIONSHIP

The New Jersey Colonials Youth Tier 1 program completed the 2020-21 regular season by advancing all 8 teams into the AYHL playoffs.  Under the leadership of Executive Director, Bruce Shatel, player development and performance continues to impress.  Last season five teams qualified for playoffs with 4 winning their division championships.  This season five teams advanced to their division championship games. 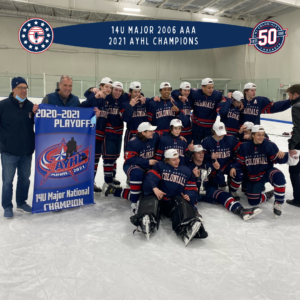 The nationally ranked 2006 team and #1 playoff seed captured it’s sixth straight AYHL championship on March 22, 2021.  Now at 14U Major, the team has been powerhouse since it’s first AAA season at 10U Minor.  They hoisted the banner and silver cup with a 3-0 victory over the North Jersey Avalanche.  Daniel D’Alessandro hit the back of the net with a power play goal in the first period with what proved to be the game winner.  The 14 Major’s padded the lead in the second on scores by Jack Genovese and Cal Hughes.  Goaltender Vladislav Bryzgalov posted the shut out with 18 saves and earned “Great American Goalie” honors.  Cal Hughes was recognized as the “All American Forward”.   It was a true team effort that carried the day.  The 14U Major 2006 team now turns it attention to the Atlantic District championships, April 10-12, 2021.  Good luck boys!

18U National Elite entered playoff weekend as the #1 seed and looking to repeat as playoff champs.  They moved past the New York Saints 3-1 to play the North Jersey Avalanche in the championship game.  Both teams fought hard and ended regulation play knotted 4-4.  Andrew Ryan led the charge offensively with 2 goals and an assist.  The team put forth an incredible effort all season but were unable to prevail in overtime.  The team’s season officially ended with a District playdown loss the the Little Flyers Premier team last weekend.  We wish the many graduating seniors all the best next season and beyond.

15 Pure 2005 Elite entered the season with a new roster and gelled to also earn the #1 playoff seed.  Winning 4-2 over the CT Chiefs, they prepared to face the New York Saints in the finals.  Another final went into overtime as the teams battled to a 4-4 tie in regulation.  Duncan Stewart scored 2 goals and assisted on Thomas Lagomarsino’s 2 goals.  Alas, the team could not muster any OT magic and lost.  Two Colonials received post game honors:  Aidan Goetz – “All American Defenseman” and Liam Rogers “Great American Goalie”.  The 15 Pure team competes April 1-3 in the Atlantic District qualifier weekend.

14U Minor 2007 American opened some eyes with strong play throughout the weekend.  The third seed going in, they played the New York Saints in the finals.  12U Major 2008 National captured the #2 seed for playoffs and qualified for the District tournament.  12U Minor 2009 American and 10U Major 2010 National were the #2 seeds in their divisions.

The Colonials 10U Minor 2011 also competed as a #2 seed and played 2 thrilling overtime games against the Lehigh Valley Phantoms.  The Colonials won 6-5 in the last game of round robin play when Charlie Sadai scored his second goal of the game.  The teams went back at it in the championship with the teams tied 3-3 at the end of regulation.  Mason Roy scored to put them up 4-3 but the game was not over.  The Phantoms found the tying goal and then shocked with the game winner late in the OT period.  The 2011’s left it all out on the ice.  Brayden Riczko was named the game’s “All American Defenseman”.

All our teams worked through a great deal of adversity with grace and dignity.  The Colonials are proud of the team accomplishments and all the individual sacrifices each player, coach and their families made throughout this challenging season.