Due to the cancellation of Nationals and amidst the national COVID-19 health crisis, we were not able to recognize some of the outstanding accomplishments of New Jersey Colonials teams and individuals.  We will celebrate the excellence of our 2019-20 teams and players as we head into the summer months.

We first want to congratulate the New Jersey Colonials Boys Tier 1 program!  They sent five of the program’s eight teams to the 2020 AYHL Playoffs.  Four teams walked away with championships at 14U, 16U and 18U levels.

Let’s recap the exciting highlights of the weekend!

The 18U National Elite team squeaked by the Little Flyers 2-1 in Saturday’s game thanks to strong special teams play.  Alex Blaszak punched in a shorty with an assist from Michael Loricco to give the Colonials a 1-0 lead on the second period.  The Colonials then capitalized on a power play opportunity three minutes after the Little Flyers evened the score.  Jason Kwestel scored, Tommy Matthews assisted and the team held on for the victory.

The 18U National team captured the championship on Sunday with a two goal flurry at the end of the 3rd period.  The team fired out of the gate when Benjamin Matton-Conover scored in the first 2 minutes.  Tommy Matthews added another late in the first and the team led 2-0.  The Avs chipped away and evened the score mid-way through the 3rd period.  Overtime loomed until Matton-Conover found the back of the net at 15:27 of the 3rd and John Pallis sealed it at 4-2 a minute later.  Matton-Conover was awarded All-American Forward honors and Zach Peterson – Great American Goalie. 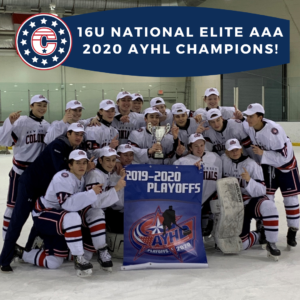 The 16U National Elite team entered the weekend as the #1 seed and punched their ticket to the finals with a convincing 4-0 victory over the Mercer Chiefs.  In the final Sunday afternoon, they entered the third period trailing the Little Flyers 3-1.  Payton Miller and Ryan Sordillo dramatically evened the score with goals 50 seconds apart and forced the game into overtime.  Colonial Zach Gallo buried the game winner and the 16U National team were champions!  The team swept the individual playoff awards as Gallo was named All-American Forward, Peter Korn – All American Defenseman and Edward Kaiven – Great American Goalie. 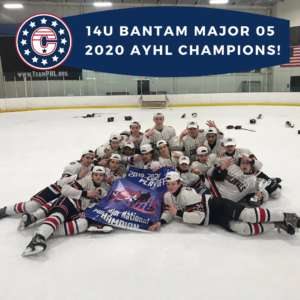 The 14U Bantam Major 2005 team entered the weekend as the #1 seed and showed why they ranked in the nation’s Top 10.  They turned away all comers and marched straight to the finals versus the Long Island Royals.  A poor start spotted the Royals the most dangerous lead in hockey, 3-0, early in the Final’s second period.  Suddenly, the team snapped to attention and scored 6 unanswered goals (scored by six different players) with Thomas Augustine, Marcel Lavitman and Tim Galvin leading the points column.  Individual honors went to Marcel Lavitman – All American Forward and John Michael Danks – All American Defenseman. 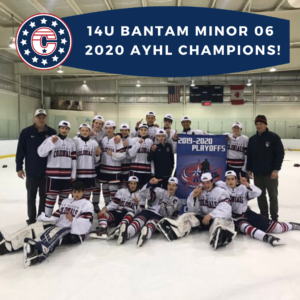 The 14U Bantam Minor 2006 team pushed into the Final after some exciting pool play games.   The Colonials were upset in the first game when the New York Saints rallied to tie the game in the third and then won in OT 4-3.  They recovered with a dominant 5-0 victory over the Long Island Royals the next morning.  Later that afternoon, they found themselves in overtime once again.  Holding on to a late 2-1 lead, the Colonials were stunned by a Valley Forge Minutemen goal in the last minute of play.  This time, Julian Brown stepped up as the OT hero and gave the Colonials the 3-2 win.

The Colonials faced off with Valley Forge once again in the final.  This time, the Colonials showed why they are one of the top 2006 teams in the nation and walked away with trophy in hand.  A complete team effort resulted in a 5-1 win.  The Colonials once again swept the individual awards with Christian Chouha named All American Forward, Andrew Check – All American Defenseman and Hayden Thorsen – Great American Goalie.